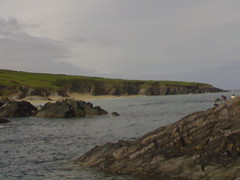 We got back from The Kingdom (Kerry) late-ish last night. As noted previously, the security outbound was ridiculous. Happily there was little security at Farranfore on the way back. They put us through a metal detector, waved us onto our plane ignoring the bottle of Fanta in my hand and then back in the UK they don't even check your passport, a boarding pass is enough if you've come over from Ireland. Obviously there's never been any sort of terrorist issues with people from Ireland in the past!

The weather over in Ireland was characteristically wet, but cleared up periodically so during one of the sunny spells we went over on a little dingy to the Blasket Islands, pictured, looked around the town, mucked about on the beach and got a bit sunburnt.

It's an interesting place - it was one of the last outposts of the Irish language and about 20 households lived on these tiny little islands until the government got them all to evacuate in the 50s, after the youngsters all emigrated to the UK and America leaving the community unsustainable.

What's remarkable about the place is that, with the encouragement of scholars who went over there to study the Irish language, a surprising number of the inhabitants started writing books about life on the island, and recounting folklore. I bought one of them, The Islandman by Tomas O'Crohan, and promptly left it with my folks.

We had gone with my parents, but unfortunately my Dad managed to break a few ligaments in his ankle just before the holiday which meant it was really hard for him to stand on it. He ended up staying behind in the cottage a lot, getting more and more browned off because he's a real outdoors kind of person. Being cooped up really doesn't suit him.

We ate out a few nights, and the seafood around Dingle is really something. I'm not sure if they're genius chefs or whether they just have amazing quality fresh ingredients but I don't normally eat much fish and even I thought it was great.

I've been to Dingle a fair few times over the years, because it's where my Grandmother was from, and my Mum lived there for a few years when she was little. Each time I go back it's got a little more commercial and there are more and more tourists wandering around. It saddens me a bit, but then I realise that I'm one of the tourists too, and they're probably thinking the same about me. I guess the family connection makes me think of myself as an insider when I'm really not.