Nokia Labs has just released a beta Location Tagger application for Symbian phones. It's functionality that they're going to be eventually rolling into the main software but for now is available as a separate download.

Basically if you run Location Tagger, when you enter the Camera mode the software boots up the GPS and adds in your location data to the EXIF headers of any photos you take.

By way of illustration, I took the following snap last night: 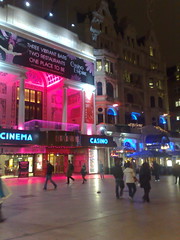 If you click through to Flickr, you'll see that they've detected the embedded geodata (on the right hand side) and provide a little map of where I was standing when I took it!

You can even get Flickr to provide a feed of geotagged photos in a format you can feed into Google Maps.

There are obviously privacy concerns if you forget and leave it on, but the current software shows you when the GPS is active and turning it off is simple enough.

It seems a very cool thing to have in future phones, and for now it's a fun toy to play with when taking pictures of (necessarily outdoor) public events.
Collapse