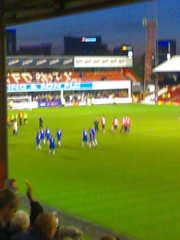 Such a blurry photo, but you get the idea.

This was, I think, my third trip to Brentford over the years. When I lived in SW London it was always fairly convenient to get to when we played them, and even though I'm little further away nowadays I was feeling pretty conscious that I hadn't yet been to a game this season.

Saturday afternoon I managed to persuade Roz to come along. Should be simple, you might think, after the millions of Watford games I've attended but it was a Herculean task. Having seen us hammer them 4-0, she now has a sort of grudging admiration. She did seem a bit shocked at the chanting, they don't tend to make much noise at Vicarage Road, preferring a combination of tuts and quiet clapping.

Losing to us is apparently now so massively embarassing that Brentford felt compelled to sack their manager immediately after the game. It's a bit of a shame because I like the club's oddly old-fashioned football experience and generally think clubs are too eager to place the blame on managers nowadays.