Oh, I haven't told you about Australia yet, have I? I'd better get on with it before the memories fade away.

We landed in Brisbane sometime on a Sunday morning, dazed from 22 hours of airline food and movies on tiny screens. I somehow managed to drive us from the airport to our hotel in the middle of town without us dying and we crashed out for most of the afternoon. Walking around Brisbane that night, not much was open and the nightlife was sort of dead. We were focussed on getting a bite to eat but everywhere seemed to stop doing food quite early. We ended up in some sort of 'English' pub, watching the Premiership!

The next day we drove down the coast to Seaworld, which is exactly what you'd expect from the name, a slightly run-down sealife-based amusement park. We had a nice time looking at the various creatures, Roz was quite taken with the tiny little penguins, basking around in the sun. 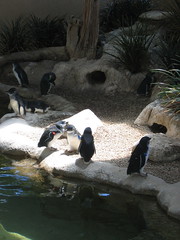 We had some lunch in Surfer's Paradise, which had an amazing beach and Ray Winstone in the same cafe as us!

We set off to the next hotel, my God, it was the worst drive of my life. We'd hadn't really looked properly at the map, so thought we had plenty of time. What we haven't considered was that

It was about an hour of tight hairpin bends, fallen rocks, massive drop-offs to the side and, after each bend, the disappointment that we hadn't arrived yet. The sun was getting lower and lower so when we finally got there it was such an enormous relief I did nothing for the rest of the day but sit around.

The place we were staying was O'Reilly's, a guesthouse on a mountain in the middle of the rainforest. The whole place was stunning - the parrots came down and perched on our balcony in the mornings, the walks in an around took us through these bizzare Australian trees that snake around each other. One of the trails takes you along a raised walkway through the tops of the canopy, it's amazing! 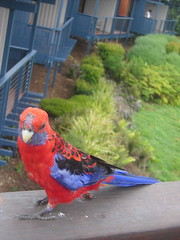 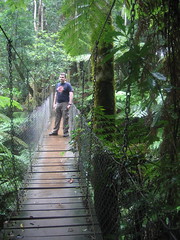 Obviously there was a lot of animal activity going on around the place. There were loads of bush turkeys pecking around the undergrowth, exotic bird calls coming from the forest, quite a few pademelons (little wallaby things) hopping around and so forth. One day, we found a MASSIVE snake in a tree, just near the balcony of the people we were there with! We were assured it wasn't dangerous, but he sure was a big one!

One night we went on a spotlight nature walk. When you go around with a big torch after dark, there's all sorts of animals out and about, not expecting a human to come along. We saw a pair of possums grooming each other in a tree, a row of swallows all sitting on a line, fast asleep, a bunch of spiders (including funnel spiders!) and loads of other things I've forgotten.

The best activity we did there was to go on a walk with this chap called Glen. The walk didn't even stray very far from the hotel, but every couple of yards he'd point out something incredible! He took us to this little bower bird's home, in a spot we'd walked past time and time again, decorated with anything blue the bird could find - plastic straws, bottle tops, bits of paper etc. He showed us how to open up a trapdoor spider's trapdoor and have a peek. He showed us a whip bird he called 'Mr Whippy' that he'd trained over years to come when he called. Best of all (apparently - some of it was wasted on us) we got to see a pair of Liar birds in the bush, something he reckoned was incredibly rare. Glen was just brilliant, he'd been doing the job for decades and knew the place like the back of his hand. I envied him a bit for having such a solid place in the world where he felt comfortable.

We weren't just there for the views and the wildlife though, there was serious business! My best friend from school, Matt, was getting married and like a fool he'd asked me to be Best Man. I've written quite a lot, however, so that'll