Well, I'm back at work after getting back at 6pm last night, I'm bloody knackered! The whole festival was amazing - the mud and rain didn't dampen our spirits at all, and the toilets weren't too bad.

davebushe, Nathan and I) went up Wednesday for a change, thinking we'd get the drop on everyone, and the place was rammed! I think it's wednesdays from then on. Wed/Thurs we mostly spent seeing the non-musical sights around the festival and, like, sitting in the stone circle and feeling the vibes. Man.

There are a few music things on, so we popped into a number of little tents to see what was going on. The Silent Disco was excellent, although possibly I was already enjoying myself a little too much at that point (see below). 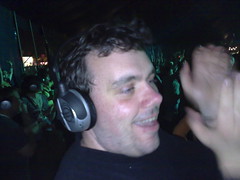 People keep asking who I saw, so I've gone back through the listings and think this is the lot... 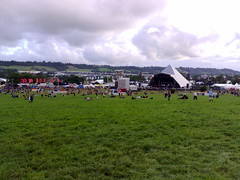 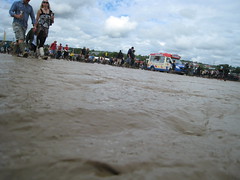 After all the excitement we spent some time up in Trash City, drinking in a 50s-style diner and dancing to some early rock-and-roll. 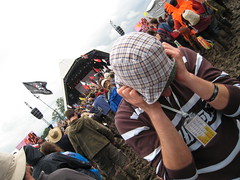 (photos courtesy of Dave's Flickr, I need to get mine developed because I was rolling old-skool).