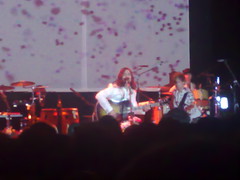 On Wednesday we went to see Bright Eyes at Shepherd's Bush. I'd recently seen them at Glastonbury so was pretty sure what to expect, but was still quite surprised by the size of the band.

All wearing white, they managed to have strings, woodwind, keyboards, 2 percussionists and even a little brass section. Most of the material was from the last album, Cassadaga, which to be honest hasn't grown on me as much as the others.

The light show was pretty cool - it was all done 'live' by a chap near us at the sound desk with a projector and a bunch of different things (glitter, water, ink, bunches of cable, acetates, Etch-a-sketch) that he manipulated live to produce some weird psychadelic effects.

Paul and I were both waiting for the older stuff, and although most of the gig was great I'd have paid the money for the rendition of The Calendar Hung Itself alone.

I'd forgotten how nice the Empire was, it's just the right size for most bands. At this point I've pretty much decided to see Bright Eyes whenever they play, but I'll be hoping they visit Shepherd's Bush again.