Recent gigs- Gossip, The Wombats and The Holloways 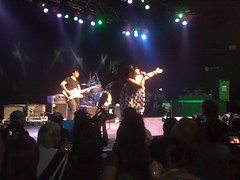 Nathan and I went to see Gossip at Glastonbury but the tent was so packed out, we couldn't get at all near the stage so it was all a bit muted. We both agreed it looked good though, so when he rang me up with a spare ticket I couldn't say no.

I'd somehow not been to Kentish Town Forum before, but liked it a lot - the stage is quite wide so even for a big act like Gossip you can get fairly near the stage without being crushed. The band were fantastic - I'm not that blown away by the album but they really are all about the live experience. Beth puts such an amazing amount of energy into each performance that you can't help getting carried away with it all. 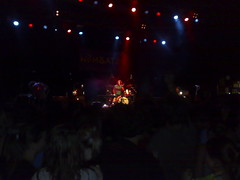 The Wombats were the first act of a bizzare 'double-headliner' arrangement with the Holloways at the Astoria, which I don't really rate as a venue. Neither of them are big favourites of mine but Roz likes them a lot and our musical tastes overlap so rarely that we had to go!

(I suspect the double-headliner thing started off as Wombats being the second support act, but that their recent bit of airplay for their single had bumped them up the bill).

From literally not knowing any of their tunes, I was surprised how much I liked them. The light show was a bit over-enthusiastic - I kept getting blinded by the strobes pointed right at me! The kids in the crowd (I use 'kids' in its proper sense - the tickets ominously said 'no under-14s' on them and I felt like the oldest man in the world) were going absolutely mental from the get-go, in that unselfconscious way that only early teens into their first real band can be. 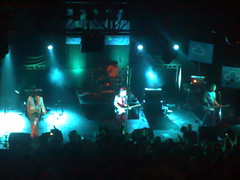 The Holloways were a bit of a surprise hit for us at Glasto so I was quite excited to see them again. The standing area at the Astoria was getting a bit sweaty and full after one full headliner set already so I persuaded Roz to retreat to the old persons' upstairs area for the second half.

I was surprised how many tunes I knew - I think it's a consequence of their album being on our alarm clock for a spell a few months back. They were very tight, energetic and full of banter. They don't really seem to respect their instruments much though - it really annoys me when people chuck their guitars to the floor just because they've broken a string or something.

They did the typical thing of leaving without playing their two biggest hits - I really don't know why bands persist with the sham of having to be asked to do an encore. It's especially obvious in the Astoria on the weekend because when the gig proper actually does end they try really hard to get you to leave so they can wheel in G.A.Y.

When they did come back for the encore they obviously played the two singles, both of which are fantastic.

It was only 9.30 when it finished (having opened the doors at 6), which seemed really weird. I'm used to leaving gigs at 11-12 so it felt a little like when you come out of a cinema and it's still light outside.

Overall we saw 2 top bands in an evening - really can't complain for £12!