Ah Mark Kozelek. You can probably tell from the number of times I blog about him that I basically go and see him every time he plays, nowadays. I remember mocking Nathan for going to both dates last time he did a couple of nights in a row, but nowadays I'd probably join him.

This time, he played Shepherd's Bush Empire which isn't my favourite venue normally. Paul was very disappointed that the tickets were seated, but it turned out the whole gig was! They'd put seats in the stalls and there were very few people up in the circle. Mark seemed a bit surprised by the low numbers ('there had better be a Jose Gonzalez concert down the road') but the smaller crowd really helped make it a bit more intimate.

The set list was great, mostly Sun Kil Moon stuff rather than Red House Painters. People kept calling out requests, which seemed to annoy him. A lot of things seemed to annoy him, actually. There were signs up saying no photography 'at the request of the artist' and the downstairs bar was closed during the gig, similarly at his 'express request'.

He's a grumpy old git but I think that's why I like him. 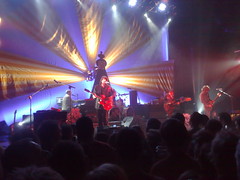 Roz and I don't go to many gigs together because our musical taste doesn't overlap that much, so going to Super Furry Animals together was a nice treat. I'd not been to the Roundhouse before and was quite curious to see what it was like (and where it was - we only knew vaguely so just wandered along Chalk Farm Road for a bit).

I love SFA but have lost track of them a bit and only gave the last couple of albums a short listen. Luckily the set was stuff from their whole career. I remember Golden Retriever getting a great reception and Receptacle for the Respectable having the weirdest low analogue sounds I've ever heard, that made my stomach feel a bit weird.

So the gig was ace, but getting out of the roundhouse was a nightmare! There's one main staircase to the doors and people were all crammed together trying to get out, shuffling towards the doors for about 15 mins. God knows what would happen if there was a fire!